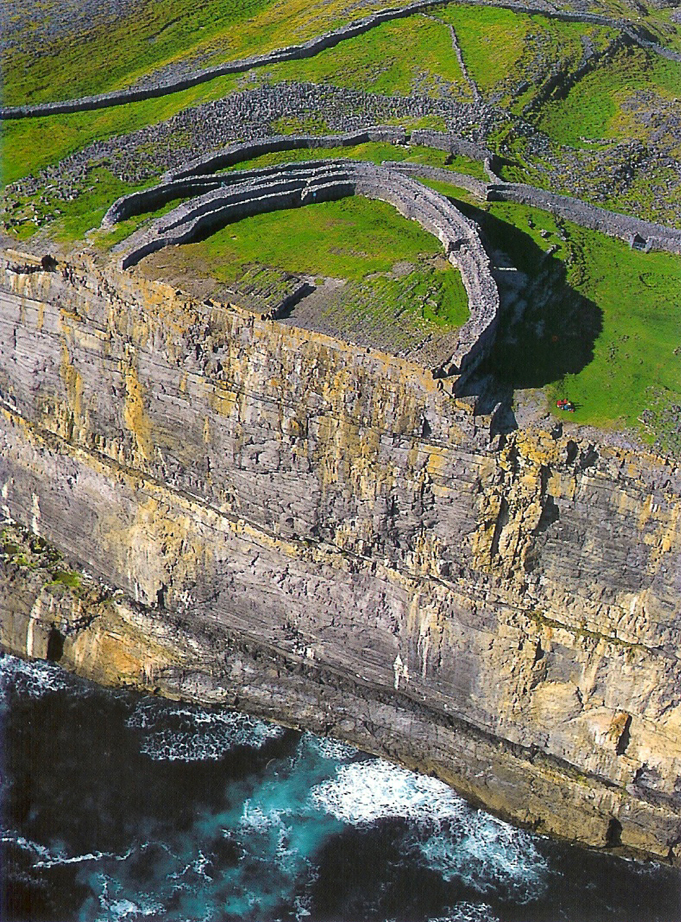 Dun Aengus is on the island of Inishmore, one of the three Aran Islands off the west coast of Ireland. It is 2,252 acres of rugged barren landscape where the wind blows strong and the islanders are hardy. Dun Aengus is a ring fort of mystery and myth, dating back to around 1100 BCE (late Bronze Age). The fort consists of three irregular semicircles, each a line of defense. The inner wall is an awesome 13 feet thick and 18 feet high in places. These walls of dry masonry are made of stones carried up the 900-meter slope and laid by hand. The inner wall alone consists of approximately 16,500 tons of stone. This enclosure within the three stone walls is 150 feet north/south and 140 feet east/west. The western cliff is a stunning and mesmerizing 300-foot sheer drop into the Atlantic Ocean.

I first became aware of Dun Aengus several years ago, when my daughter Devi shared a photo of herself standing on that cliff, her hair and cape blowing in the wind. The image stirred a deep sense of awe laced with incredibly deep fear.

In March of this year, my dear friend Barbara invited me to join her on a tour with Mara Freeman, “Spirit of Ireland.” When I looked at the itinerary, the first name that popped out was Dun Aengus. I felt my stomach tighten with uneasiness, yet the excitement of going to Ireland was so delicious, I quickly put all my concerns aside.

We were into our seventh day of a wonderful journey filled with the sights, tastes and experiences of this breathtaking country. Our tour had taken us through Killarney and ancient stone circles. We toured the Beare and Dingle Peninsula, which offered us a panorama of the beautiful coastline and countryside. We stopped at sacred wells and ancient megalithic sites. We had just explored the Barren with its lunar landscapes and array of lovely wildflowers when I decided to take a day off and stay in our bed and breakfast. I could feel myself anticipating our trip to Inishmore. A deep inner calling urged me to go. I wrote in my journal, rested and read. As I fell asleep that night, I knew that the next day I would confront a number of my deep fears to get to Dun Aengus.

We would have an hour-and-a-half ferry ride over the rough Atlantic just to reach the island. I am not fond of boats, much less trolling about in the ocean. The first fear presented itself quickly. When we arrived at the dock, we found the ferry waiting offshore, so we had to climb into a small unsteady boat to get out to the ferry. The water was extremely rough and scary. Could I do this? I was sorely tempted to get on the bus and go shopping with some of the others, yet I sensed my inner guidance prompting me to continue. With a deep breath, I asked for Spirit’s presence, made the commitment, and scrambled aboard the small boat.

Once on the ferry, I found a place inside to sit and quickly closed my eyes. As I said another prayer, I relaxed into the rhythm of the water and the waves. A vivid visualization settled my fears almost instantly. I felt myself in the belly of the Goddess, the up and down motion of the waves becoming the Goddess’ walk through the countryside. She carried me in her womb as she moved, danced and swayed. This visualization gently supported me through the entire ferry ride.

Inishmore is home to about 900 people who have carved a life on this austere island,  given to the harshness of the elements. Arriving on shore, we walked to the bicycle rental stand. It was a four-and-a-half mile ride to our destination. Everyone started off
dodging people, cars and pony carts along the narrow little road. This was my  second fear rising up for the challenge: I was in no physical condition to ride a bike so far uphill.

In minutes everyone else zoomed ahead. One our tour co-coordinators, David stayed behind to encourage me, and I pushed awhile, rode awhile, and then pushed the bike again. My legs burned, my lungs struggled for breath. This was a serious challenge. As I prepared to turn back and settle for a tour of the quaint little village, guidance from within prompted me to continue. I prayed; I pushed the bike, rode, pushed, and said another prayer. The road evened out and I breathlessly finally completed the ride to the base of Dun Aengus.

Everyone else had gone ahead by the time I arrived. I had an hour to climb to the top and return so I could ride back to the ferry. The third challenge: It was 30 minutes to the top. There was no way I could climb the long uphill 900-foot rock strewn treacherous slope. My legs already felt like noodles. I was tired and out of breath, but I was also close to tears because the inner urging had become very loud. I must get to the top. In another silent prayer, I asked again for assistance from Spirit.

Within moments, David ran up and announced that I could ride the shuttle to the ferry and leave my bike. This gift granted me an extra half hour. I connected with one of the others and we started out together. A young man named Chris soon joined us. Taking my hand, he said, “Come on, Peggy.” I felt energy flowing in from our contact. “Chris, you are giving me your energy,” I warned. “Take all you need,” he reassured. “I have plenty.” Amazingly, I felt renewed. My legs are strong again, and we made it up in about 15 minutes, which is incredible considering the steep climb. 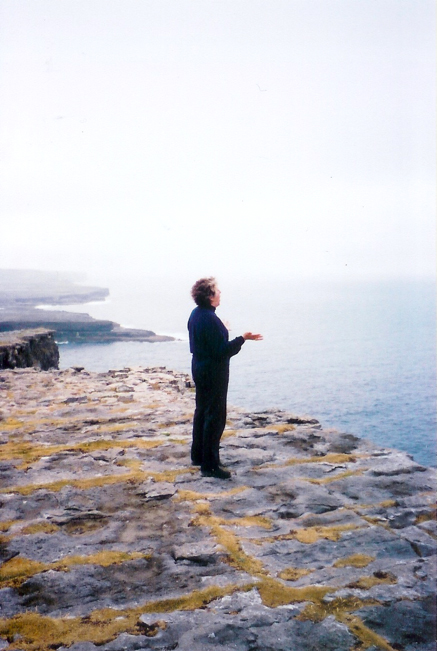 As we stepped into the enclosed space at the top of the fortress, we are greeted by the laughing and squealing of nearly 200 children boisterously enjoying a field day for the Aran Island schools. This was not what I expected. I was hoping to create a ritual offering the Sacred Sounds to this ancient site.

The view atop the summit was stunning, breathtaking in its grandeur of the ocean with gray sky melting into the horizon. The awesome 300-foot cliff is hypnotic: enticing and scary all at the same time. We were greeted by the wind blowing off the Atlantic, bringing a chill and a sense of ancient power. We took the usual photos to remember this place, while somehow knowing it is now a part of our DNA. I actually laid on my belly with Chris holding me feet to bravely look over the edge. Wow, instant vertigo!

Finally, I collect and center myself. I stand, with eyes closed in prayer, surrender and allow myself to channel the Sacred Sounds. They are given to the wind, the clouds, the ocean and this inspiring place. As the Sacred Sounds vibrate through me, I become a tuning fork. My awareness shifts. The sounds always alter me, and this time was no different. 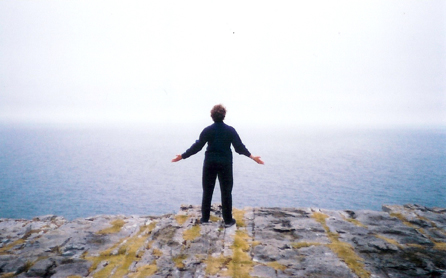 They were declaring me a Banshee (Bean Sidhe). That’s Irish for fairy woman, a supernatural being of psychic powers in Irish and Celtic folklore. Her sharp cries and wails are also called “keening.” She is White Lady of Sorrow, she is a Woman of Peace and the Spirit of the Air.

The children came up, touched me and thanked me. I was overwhelmed, emotional and still altered by the experience. Chris and I start down the hill and the children follow, nodding to me as they pass. I hear my inner guidance say: “Well done. The Sacred Sounds have activated some of the children’s codes.”

8-5-2004:
Peggy, Yes, it is extraordinary to see how Spirit operates. Your journey through your fears to get to the top of the cliff allowed you to be in the “right place at the right time” to transmit sound codes to those children behind you. Who knows how they will internalize that experience? Young children tend to take things literally and their encounter with a Shee at such an impressionable age may very well become part of the mythic life of the more sensitive ones. It is a powerful story and speaks to so many levels of life. Take care Tom Kenyon.

< BACK TO SOUND EXPERIENCES